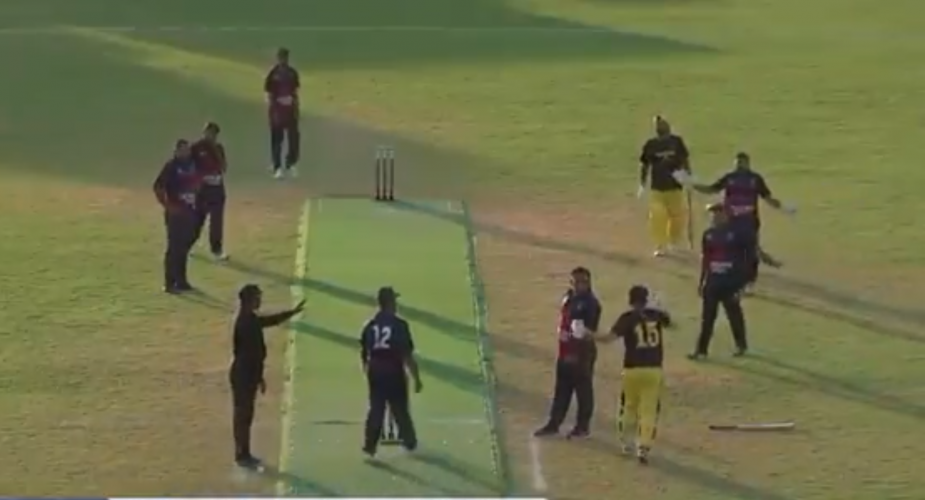 Abizarre last-ball incident club cricket T10 match in Barcelona has divided opinion and highlighted an interesting part of the laws of the game.

Pakcelona CC needed three runs to win off the final delivery in their chase of 108 against Catalunya CC. They ran a single, but seemed destined to end up one short, only to level the game in dramatic fashion.

Having played all around a short-of-a-length delivery, Adalat Ali, the Pakcelona batsman, scrambled for a run even as the wicketkeeper collected the ball. The gloveman was presumably under the impression that, once he collected it, the ball would be dead, but the batsmen came up with a canny tactic to keep the ball alive.

Ali, now at the non-striker’s end, left his ground and ran towards the striker’s end, with his partner Azeem Azam staying in place until the keeper threw the ball to the bowler in an attempt to run out the out-of-his-ground batsman.

As soon as the keeper released the ball, no safe from being run out at the striker’s end, Azam sprinted towards the non-striker’s end to complete the second run and tie the scores.

The bowler, after collecting the throw from the keeper, attempted a direct hit at the non-striker’s end, and missed. It allowed Pakcelona to level the scores, and push the match to a Golden Ball.

“That is inspired. That is utterly inspired,” bellowed the on-air commentator who could scarcely believe what ha dhappened. However, Pakcelona’s enterprising running divided opinion on social media, with some saying the ball was dead the moment the keeper collected it. Others were under the impression the keeper should have broken the stumps to end play.

According to article 20.1.2 of the the ICC’s playing conditions for T20I cricket, a ball is considered dead “when it is clear to the bowler’s end umpire that the fielding side and both batsmen at the wicket have ceased to regard it as in play.” The playing conditions of Men’s T10 European Criket Series follows the same regulations.

SCENES! 2 to tie off last delivery, ball in wicket keeper hands and need another run. WHAT TO DO?? 🏏🇪🇸 pic.twitter.com/xFQuaUOreu

Given the umpire hadn’t specifically signalled the ball was dead, and with the Pakcelona batsmen clearly considering play to still be active, they were within their rights to attempt the second run. The onus was on the wicketkeeper, and by extension the bowling team, to effect a run out.

What is unclear is how the ball could ever be called dead, if the batsmen were to never cease regarding the ball as being in play.

Catalunya still won the match, after not conceding a run in the golden ball. (wisden)