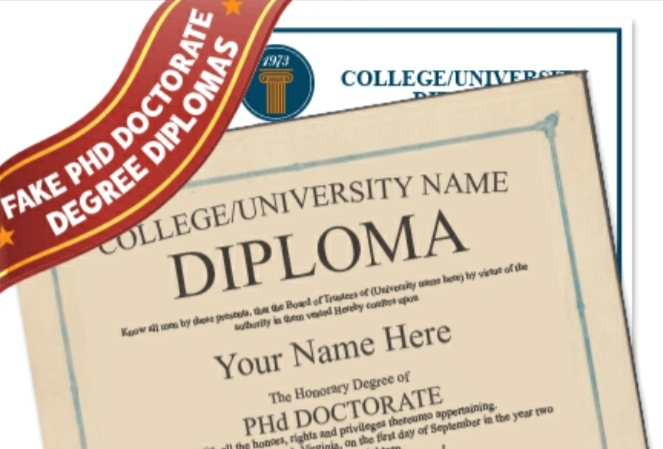 When I was awarded an MBA from University of Colombo, it was after two years of hard work, compulsory attendance, participation in lectures, submission of projects and writing examinations. Sadly, today, anyone can buy an MBA in Sri Lanka or even a Doctorate for that matter just by paying few hundred thousand rupees without even learning a thing.

Sri Lanka can be proud of its high standard of education and the fact  that an educational qualification obtained in Sri Lanka is recognized and valued internationally due to the rigorous expectations of our universities and colleges and the higher standard-setting of our teachers, lecturers and professors.

However, it is incredibly sad and disturbing that an increasing number of bogus institutions have invaded the country offering fake degrees and doctorates for a payment of between Rs. 100,000 – Rs. 1,000,000, then disappear the same day. In Sri Lanka, in recent times, you can see an alarming number of these fake graduation ceremonies selling fake degrees and doctorates. It is disappointing to witness that many international universities support these institutions purely based on the financial benefits they gain from these bogus institutions.

However, these international universities clearly differentiate the weight given to the same qualification offered in the parent university and in the other locations, a fact most innocent students are unaware of. In many cases, the ‘university’ that offers the degree does not exist anywhere in the world except as a Facebook page. For students, it sure sounds easier to go online, pay between Rs. 100,000 – Rs. 1,000,000 or so for a fake bachelor’s degree, MBA or PhD, complete with no transcripts, and slap that on the resume without doing any of the work or learning.

While working in the field of professional higher education for well over a decade both in Sri Lanka and abroad, I have come across many of these fake doctorate holders freely roaming around in countries where the education system is loosely regulated. For example, in some middle-eastern countries it is a familiar scenario that these fake doctorate holders run bogus educational institutions and sell fake diplomas, degrees, and post-graduate degrees only differentiating them by the amount the student is willing to pay to these culprits. I will write a separate post on this, exposing irregularities in this area to save students being looted by this organized mafia as many Sri Lankan students contact me asking for information relating to these bogus institutions offering bachelor degrees and MBAs for attractive prices.

It is sad to state that with the growth of factories dishing out certificates, diplomas, bachelor’s degrees, postgraduate degrees, and doctorates, we lose our confidence in our private sector higher education. According to the figures compiled by the Guardian, the growth of Assignment Outsource Services (Assignment Mills) is unbelievable and many institutions show a blind eye to this. In 2016, it was estimated that over 20,000 students took academic outsourced service in the UK alone and the numbers in Sri Lanka too will not surprise you. What is even worse is that the  Sri Lankan government and institutions who should be concerned with the effect on the high standard of education in the country, turn a blind eye, and in certain cases take part in these fake graduation ceremonies as special guests.

Recently, many of these bogus institutions, which mainly operate from India and African countries are approaching the segments such as low-profile local politicians, self-proclaimed social workers, entrepreneurs, and interestingly, high-profile police officers, to sell these fake qualifications based on no-criteria. They make quick-bucks and disappear, creating serious consequences to the country and civil society:  not only is there a  huge financial outflow from the country, but members of the public will depend on the advice of these ‘degree holders’ who are not qualified, and the status of Sri Lankans and their educational and professional abilities will be tarred both within the country and internationally.

What should be done ?

It is, a collective responsibility of the University Grants Commission (UGC), Ministry of Higher Education, academics, professionals, authorities, the state universities and professional bodies established through acts of parliament to look into this matter more seriously and to bring it to the notice of the government to establish a law that will contain and severely punish the culprits who both buy and sell these fake degrees. A law should be introduced enabling the public to make complaints against individuals using fake doctorates after their names; at present there is no legal provisions to do so.

The government should ensure that any degree granting institution in Sri Lanka is thoroughly investigated and licenced to ensure that these institutions actually deliver the courses required to obtain such degrees. There should be auditing provisions that allow government and students to review the lessons being taught and the work completed prior to granting the degree. Bogus institutions should be publicly identified, and their names should be easily searchable by vulnerable members of the public. There should be penalties for those who sell and buy fake degrees including serious financial penalties.

It is also crucial that the popular venues for graduations in Sri Lanka such as BMICH should establish a checking and tracking system in collaboration with the University Grants Commission that would help them prevent providing their halls for these fake graduation ceremonies.

(Above is an edited version of the original article. Full article is available here  👇)