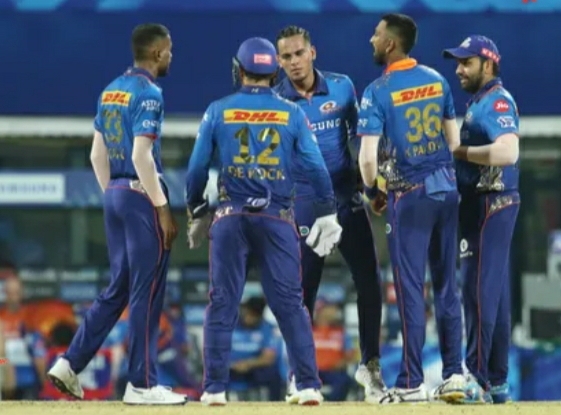 Mumbai Indians (MI) secured their first victory of the season after beating the Kolkata Knight Riders (KKR) in Match 5 of the VIVO Indian Premier League (IPL) 2021 at the M. A. Chidambaram Stadium in Chennai on Tuesday.

Rahul Chahar registered his best bowling figures (4/27) in the IPL as MI successfully defended the total of 152 against KKR.

Chasing a target of 153, the KKR openers – Nitish Rana and Shubman Gill – took calculated risks to start off their innings, with Rana doing majority of the hitting.

The duo batted positively, targeting the pace of Jasprit Bumrah and Trent Boult, and hitting some well-timed strokes, including a drive from Gill off Bumrah, and completed a 50-run stand soon after the conclusion of the powerplay.

The pair continued to bat on before Chahar provided a breakthrough for MI after Gill lofted one into the hands of the outfielder in the 9th over. KKR were placed at 81/1 at the halfway stage and it was Chahar once again who struck for the MI, dismissing Rahul Tripathi in the 11th over.

While Rana brought up his second consecutive half-century in the season, Chahar scalped his third wicket of the match, dismissing KKR skipper Eoin Morgan in his third over. A well-set Rana was the next man to get out as the young MI leg-spinner outfoxed the left-hander before de Kock dislodged the bails to give MI and Chahar his fourth wicket.

MI continued to mount pressure on KKR as Krunal Pandya then got the wicket of Shakib Al Hasan, who was caught in the deep by Suryakumar Yadav in the 16th over. Krunal had a chance to add one more wicket to his name but could not manage to hold on to a sharp chance as Andre Russell got a life even before he had opened his account.

The big-West Indian all-rounder got another life in Krunal’s next over as Jasprit Bumrah could not grab a skier. Krunal, to his credit, though conceded just three runs in the 18th over, exerting pressure on KKR.

Bumrah, who bowled the penultimate over, then brought his wealth of experience in bowling the death overs into play and denied the duo of Russell and Karthik a chance to open their shoulders, giving away just 4 runs.

With 15 runs to defend, Boult was given the responsibility to bowl the final over against the likes of Russell and Karthik and he delivered for the team, cleverly varying his pace as he scalped two wickets, including that of Russell and helped MI seal a stunning 10-run win.

Earlier, MI, who were asked to bat first, made one change to their playing XI as Quinton de Kock replaced Chris Lynn at the top. However, the left-hander made an early exit after being holed out in the deep off Varun Chakravarthy’s bowling in the second over.

Suryakumar Yadav, who replaced de Kock in the middle, got off to an aggressive start, creaming three boundaries in the third over off Harbhajan Singh. While KKR managed to keep Rohit Sharma quiet, Surya continued playing his shots as MI finished their powerplay at 42/1.

The right-hander smacked 16 runs off the 8th over bowled by Prasidh Krishna, hitting the pacer for a couple of boundaries along with a stylishly-flicked maximum and then brought up his fifty in style with a mammoth six off the bowling of Pat Cummins.

KKR desperately needed to break the partnership and they struck twice in quick succession, courtesy Shakib Al Hasan and Cummins. While Shakib, who was playing his 50th IPL game for KKR, dismissed Surya for 56, Cummins got the wicket of Ishan Kishan.

The duo of Rohit and Hardik Pandya then added 27 runs in the next four overs before Cummins castled the MI skipper as the latter tried to slash one on the off-side.

KKR bowlers were magnificent at the death, not allowing the big hitters – Hardik Pandya and Kieron Pollard – to cause any damage as the MI wickets came in plenty.

Prasidh Krishna got Hardik out for 15 in the 17th over before Russell ran through the MI batting line-up, scalping five wickets in his two overs.

In the 18th over, Russell picked up two wickets, dismissing Kieron Pollard and Marco Jansen and then bowled a three-wicket final over and completed his maiden five-wicket haul in the IPL which helped KKR bowl out MI for 152.