Mrs. Sri Lanka controversy: Crown to be returned to Pushpika 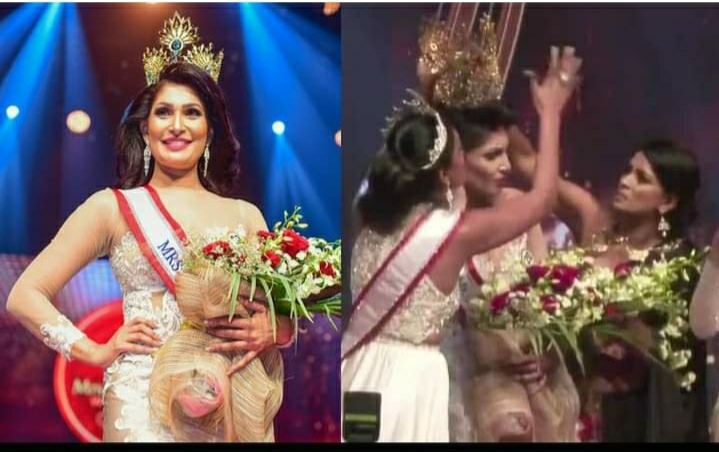 Mrs. Sri Lanka for Mrs. World contestant Pushpika De Silva will be reinstated as the winner of the pageant held last night.

The Mrs. Sri Lanka for Mrs. World crown was taken away from de Silva after she was announced as the winner and crowned.

Mrs. World and former Mrs. Sri Lanka Caroline Jurie had taken the crown under the claims that Pushpika de Silva was divorced, and hence cannot compete in the event.

A tense situation arose at the event last night, after Caroline Jurie had made the announcement during the event and had teherafter announced the runner up as the winner.

He said Mrs. World and former Mrs. Sri Lanka Caroline Jurie who was part of the judging panel had not raised an issue in this regard until the crowning, adding that no document has been provide to prove the claims against Pushpika de Silva.

Meanwhile, Mrs. Sri Lanka for Mrs. World contestant Pushpika De Silva has announced that legal action will be initiated with regard to the incident.

Issuing a statement, Pushpika revealed she is not divorced and is living separately with her son due to personal reasons.

Pushpika further said that the organizers were informed of her status prior to competing in the event, and if she was unsuitable she would have been disqualified earlier.

The Mrs. Sri Lanka for Mrs. World has been hosptalised due to injuries sustained while the crown was removed by reigning Mrs. World Caroline Jurie.

Pushpika said she was hospitalsied this morning and was receiving treatment for the injuries sustained to her scalp.

She thanked all her well-wishers and fans for the support extended during this unfortunate incident. (NewsWire)