A few years ago, my team and I presented to one gentleman who is the topmost senior person of one of Sri Lanka’s largest corporations. This company was going through a bad patch in their business performance due to a massive social media backlash, and we were presenting them a crisis handling strategy.

We were a little nervous because my team has never worked with him directly even though his company was a long-standing client of our agency for many years.

We went into his boardroom, there were several other senior members from his team attending the meeting, and after a few friendly casual greetings, we started delivering our presentation.

For the first 15 minutes, we were never disturbed by anyone. And then, at one of the slides my colleague presented, this gentleman stopped and asked for few clarifications. He was fully engaged with what we were presenting, and he was asking the perfectly right question at the perfectly right moment during our presentation. He was never arrogant and never showed us that “I know better than you all because I am senior”, which is a prevalent attitude thrown by people in the same ranks as him.

We didn’t have the answers to most of his questions, but it was indeed a pleasurable meeting for everybody involved. We loved working with him! When it comes to adapting to Digital, he appeared to be on the “slope of enlightenment” in the famous Dunning-Kruger curve!

A few years earlier, to this incident, we were making a similar presentation to another gentleman in the same rank as this first gentleman. His company was going through a similar social media backlash. We worked day and night to prepare a perfect crisis management strategy. And when we went to present our proposed strategy to this gentleman, he stopped us at the 3rd slide of a 45 slides presentation deck. From that point onwards, he continuously spoke for one hour, telling us what to do and what not to do. He believed that the “social media crisis” is an over-blown term, where a few people talking negatively on social media cannot bring down their company so quickly. He was in the opinion that we needn’t do anything.  Then he abruptly ended the meeting, saying he is in a hurry to attend another meeting. He was a well experienced senior manager, too, with over 20 years of experience in his industry. Still, we were confident his experience had nothing to do with social media or digital strategy. This gentleman was clearly sitting on the top of “mount stupid” in the Dunning-Kruger curve regarding his perceptions about digital.

The company which the 2nd gentleman led bankrupted a few years later and got acquired by a competitor in the same industry.

The first gentleman’s company went through a bad patch in that year. Still, with a consistent and well-organised effort in social media crisis management and good overall PR execution, they bounced back strong precisely a year later!

What is the lesson from these two stories for C-Level managers to do better in their digital game?

The lesson is, avoid getting stuck in the “Mount Stupid” of the Dunning-Kruger curve!

Wait a minute. Did I tell you what this Dunning-Kruger curve is?

In 1999 Professors Dunning and Kruger published the paper “Unskilled and Unaware of it: how difficulties in recognising one’s own incompetence lead to inflated self-assessments.” 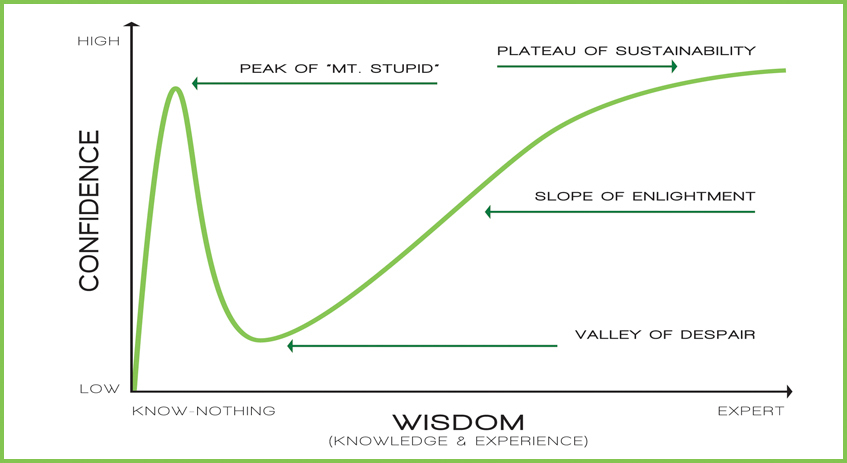 According to the research done by the two professors, the lesser you have “knowledge and experience” in a particular field, the more likely you are to be “over-confident” about your existing skills in that field.

The first stage of the Dunning-Kruger curve is the “Mount Stupid”. This is where you feel fully confident about the subject matter, but you don’t have any experience in that subject, and you are not willing to learn. You believe you already know everything!

You can stay stuck on the top of mount stupid forever, or you can drop down to the “valley of despair”, which can set you in search of a different peak. Valley of despair is the point on the Dunning-Kruger curve where you begin to realise that “I know nothing about digital”, and you become nervous about your ignorance. This is a signal that you have to do something quickly. You have to get to the “slope of enlightenment” sooner or later. The slope of enlightenment is the stage where you start to believe “there’s more for me to learn in this field, and I can learn from other people”.

A successful C-Level manager will let go of their ego and will become receptive to learn from a junior and much younger person. They will climb up the slope of enlightenment faster and reach the “plateau of sustainability” where they become true digital leaders of the modern-day business world.

This was the difference between the first gentleman and the second gentleman in my opening story. The first one was less egoistic and was open to learning from juniors who are better skilled in new media and digital. The second gentleman thought, simply because he has years of experience in corporate management, the skill of new media and digital strategy also was inherently within him.

I have worked with dozens of senior corporate managers and business owners in Sri Lanka over the last decade and a half.  I have realised that some senior business people in Sri Lanka are too self-centred to move farther from the “mount stupid” on the Dunning-Kruger curve. It’s tough to challenge their self-belief that they already know everything about social media and digital marketing. As a result, many organisations and their middle to lower-level managers suffer. The top executives are shooting down more realistic and practical strategies proposed by lower-ranking digital strategists because they are not ready to accept this paradigm shift.

Among them, these few enlightened senior executives (like the 1st gentleman in my opening story) are open-minded to learn from the junior people and broaden their horizons in digital, which enables their organisations to thrive in the digital world.

Knowing how much this is important for today’s business organisations, the Dunning-Kruger theory is the first lesson I teach my students at APIDM who follow the Professional Diploma in Digital Marketing.

We have students who come to us while sitting in the bottom of the “valley of despair”. We help them slowly get into the “slope of enlightenment” and continue to support them in reaching the plateau of sustainability in their digital marketing careers. 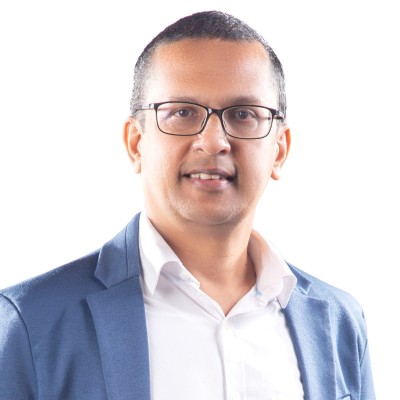 Amitha is currently the Co-Founder and Chief Executive Officer of the Asia Pacific Institute of Digital Marketing. He started his Digital Marketing career in 2004, as an eCommerce executive in an Online Travel Agency (OTA) company and later held the position of Chief Operating Officer of Neo@Ogilvy Sri Lanka for ten years.

He has over 15 years of experience in formulating digital communications strategies for many local and multinational brands.